Steeped in the rich history of American hybrid roses, Vintage Gardens Bed & Breakfast is a unique property of historical significance.   It is noteworthy for its association with the growth and development of the Jackson & Perkins Company, one of the largest and best-known horticultural firms in the United States.  In addition to roses, the Jackson & Perkins Company also became major distributors of lilacs, clematis, azaleas, berries, rhododendrons and many other varieties of flowering plants. In the first decades of the twentieth century, Jackson & Perkins achieved worldwide fame, particularly for its roses.

This included the “Dorothy Perkins Rose,” which in 1908 received a prestigious award from the National Rose Society of Great Britain.  In the 1920’s and 30’s, while located in Newark, New York, the company’s research directors were prolific in developing hundreds of new varieties of roses.  The company’s public renown earned Newark the nickname “Rose Capital of America.”

Jackson & Perkins maintained display and test gardens on and beside the property until the mid 1930’s.  The rose gardens were so popular that the company designed a seventeen-acre rose garden on route 88; at its peak, the rose garden displayed more than 36,000 rose bushes and attracted 500,000 people a year.  Unfortunately, neither the test gardens nor the roses have survived, however Vintage Garden Bed & Breakfast’s landscaping retains many elements of the original design.

Today, the grounds boast a formal rose garden and fountain, large mature trees, many perennials and lovely woodlands.  Guests love to stroll along the trail that winds its way from just behind the house and meanders casually to a picnic table in the woodland area or taking afternoon tea in magnificent formal heirloom gardens adorned with dogwoods, cherry trees, flowering perennials, annual vegetables, rhododendrons, azaleas and more than 100 varieties of roses. 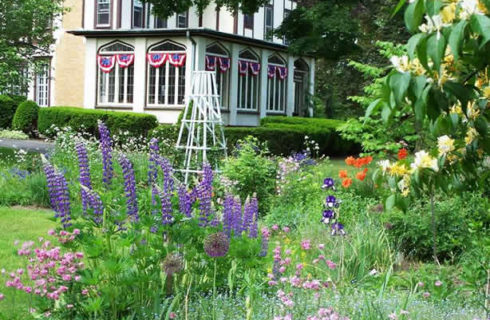 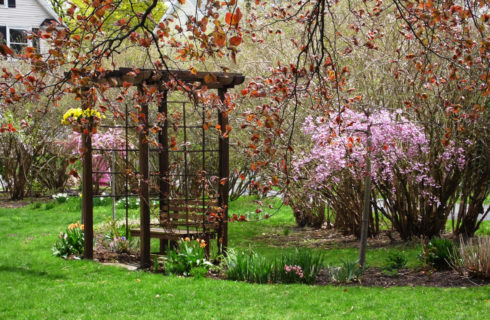 Book DirectGet the best rate and best attention to your needs when you book direct.